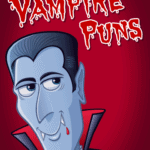 Of all the fictional monsters, vampires are undoubtedly the most fleshed out. Everyone knows they drink blood, avoid sunlight, sleep in coffins, can’t see their reflections, and hate garlic, among many other traits. Then there are all the memorable celebrity vampires, starting with the immortal Count Dracula.

In other words, if you’re looking for vampire-inspired wordplay, there’s plenty of material to tap into. For those who enjoy such biting humor, we’ve put together the following collection of vampire puns. Whether you’re in need of a Halloween caption or just a good joke about bloodsuckers, you can get your fill here.

Here are some vampire-related riddles.

The following vampire puns are great for crafts, picture captions, and the like.

These witch puns are so bad, you might even find them hex-cruciating.