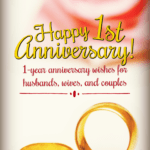 One-year wedding anniversaries are underrated. Sure, a year isn’t a long time in the scheme of things. But the adjustments a couple has to make in that first year of marriage are huge, and getting through them is an accomplishment worth celebrating.

Besides, there’s something about a new marriage that’s simply precious. It’s this special time that a couple will look back on for many years to come. In fact, it’s bound to be one of the things they reminisce about when they reach those major milestone anniversaries later on.

All that is worth keeping in mind as you think about how to wish someone a happy first wedding anniversary. Whether you’re sending congrats to a couple you know, or a few loving words to your own spouse, the following list of first anniversary wishes can help you find the perfect message.

Here are some one-year anniversary wishes for a couple.

Here are some first anniversary wishes for a husband. For more ideas on how to express your love to your hubby, see this article.

Finally, here are some first anniversary messages for a wife. For more sweet wording ideas for wifey, check out these love messages for her.

To add an extra-special touch to your first anniversary message, you could also include a famous quote. There are some good candidates in this list of quotes about time and love.